Gabriela and The Widow 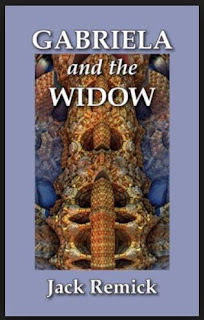 
Gabriela andThe Widow.  The story begins with Gabriela, a fourteen-year-old Mixteca from Mexico, as she and her mother journey on foot through the war-torn country.  (Okay, for those of you like me, who do not know what Mixteca means, Wikipedia defines it as indigenous Mesoamerican peoples inhabiting the Mexican states of Oaxaca, Guerrero and Puebla).  After her mother passes away, Gabriela finds herself lost and alone without anyone to tell her what to do.  The next few years takes you through her life as she goes from one despicable situation to the next until she finally arrives in El Norte.


Enter the Widow.  La Viuda is an eccentric ninety-two year old woman desperately trying to capture her past on paper.  Having saved everything from hair and nail clippings to letters and photos, she is determined to put together “The List”.


Together, Gabriela and La Viuda work daily on “The List”, the widow traveling down memory lane as Gabriela records the details.   Life, to La Viuda, is filled with nothing but betrayal and deception.  As she retells her stories, Gabriela begins to share in the memories, experiencing them as if they were her own. After La Viuda ninety-third birthday, the widow passes away, leaving her estate to Gabriela.  Having the means to do whatever she desires, Gabriela seeks revenge on all those who have hurt her.

I found Gabrielaand The Widow to be well written, giving a terrific sense for the characters and locations.  I particularly did not like this book as it went against my own personal beliefs.  That does not mean to say others will not enjoy it.   As for content, I felt it lacked substance, the entire story essentially about past acts of sex and betrayal, and males being nothing more than a mistake. Throughout the book, Gabriela and the Widow communicate in different languages, sometimes leaving the reader out of the conversation.  The ending comes as a twisted surprise, Gabriela changing from an innocent girl to a vengeful warrior inflicting pain on those who have harmed her.  Again, the book was well written, putting the reader right there in the room with the characters.
at 4:49 PM No comments:

The Woman on Pritchard Street by JD Young 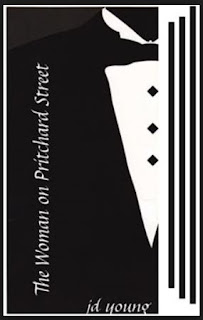 Publisher: Young Lions At The Gate


Slaying demons from Hell, Simon brings Grace back to D.C. with him only to learn his benefactor is responsible for all the brutal attacks occurring in Georgia and D.C.  Further probing unveils dark secrets concerning key players throughout D.C. as well as across the globe-secrets that even he is not immune to. With the puzzle unraveling, Simon soon realizes his own life has a hidden past.  Traveling to Budapest to seek out answers, he reunites with his powerful grandparents, who bestow upon him all that he needs to wage war back in D.C.


As for heroic attributes, Simon drank a little too much, had a raging temper and made one too many derisive comments.  He also pigeonholed all the folk in his hometown as uneducated, dirty and apathetic. The emotions portrayed were lax concerning the slayings and Grace’s death, but the kicker was when Simon set loose his dog on another character. The time spent in Budapest had the reader perking up, but the story crashed again on return to D.C.


The Woman on Pritchard Street has a good story line and gives the reader a few unexpected laughs, but lacks a certain depth. As Simon states, everything fall into his lap a little too easily. With that said, it seemed the author is allowed less effort into the telling of the story.  A definite summer read for those pool side days! 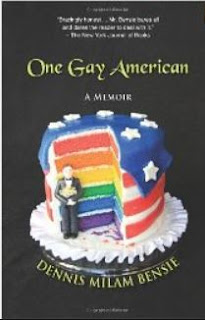 Genre: Memoir
Published by: Coffee Town Press
Pages: Paper Back
Ratings: 7 JAGS
Dennis Milam Benise return memoir; One Gay American is a beautifully crafted coming of age, coming out story. Benise takes the reader on brief history lessons of the strides the people of the LGBT Community have accomplished, all the while making parallel connections to his own personal struggles.
As a child born into 60s, Dennis grows up in the conservative Mid-west. From an early age, he realizes he is way different than other boys his own age, all the while navigating a secret fascination for wedding dresses and Barbie Dolls from his passive aggressive parents. Dennis learns to cope with his effeminate mannerism by joining theater, where he eventually finds his future wife at the young age of 19 and gets married.
Dennis Milam Benise’s One Gay American is a wonderfully written story of real life, and the obstacles that we all face to find our true identity-and with that, true love. Dennis’s matter of fact approach to the foibles of everyday life as a young gay man is stereotypical in most period memoir pieces of similar fashion, but his monologue shines brightly as he puts forth a connection in his growth of being a shy effeminate male, to an out and proud gay man.
at 3:18 PM No comments:

Torch In The Dark by Hadiyah Joan Carlyle 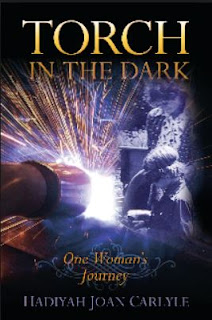 Genre: Memoir
Publisher: Book Publishers Network
Ratings: 4 JAGS
Blog Review:  Virginia Armstrong
Torch in the Dark is a story of a woman’s lifelong journey as she struggles with the traumatic events of her childhood.  The story takes place during the 60’s and 70’s, the hippie generation, when pot and protests reigned.  It was also a time when little was known about the mind and how past experiences could adversely affect ones personality, emotions and overall well-being.
Once her story comes out, her parents and doctors refuse to believe the truth and she finds herself committed to a mental hospital, having to endure shock therapy and plied with medication. Faced with having to conceal the truth for freedom, she turns to friends for help.  Soon after, she finds herself pregnant.  Pressured to either abort or put the baby up for adoption, she chooses to raise her son alone. It is during this time that she learns about welding.  Taking a class among all male students, she persists, knowing deep inside her that this is something she must do.  It is in striking the arc that frees her, making her feel whole again.
Torch in the Dark begins strong, the author grabbing hold of the reader’s emotions and taking them along on the journey. Unfortunately, that only lasts for a few pages into the story.  The author then seems to engage in another style of writing, her words becoming empty and void-the material read almost robotic. Throughout the story, her instincts seem to be dead on, yet most times she looks to others for direction, which ultimately makes matters worse.
As time goes by, she becomes more aware of her issues, and yet she uses them as a crutch instead of trying to change them.  Soon the story takes on a whiny tone and the reader becomes frustrated with the author. By the end of the book, you realize the author is always eager to take from others, but is never willing to give in return.
at 4:57 PM No comments:

Genre: Young Adult
Published by: CreateSpace
Pages: Paper Back
Ratings: 2 JAGS
Blast of the Dragon’s fury is a pretween story about a young boy and the difficult decisions he has to make to save the land of Oomaldee, and find his way back home. After the murderous deaths of the King, Queen and the Princess Imogenia by the hand of the Prince, Princess Imogenia makes a deal in the spirit world to curse the land of Oomaldee until her brother the Prince, is punished for his crimes.
Flash forward one hundred years and a different world away, Andy Smithson is in trouble once again and this time his punishment isn’t no video games, but instead a journey that will teach him lessons about the person that he can become.
Blast of the Dragon’s fury was a snooze. Nothing about this book was memorable, except the plot of the story explained everything right away, with absolutely minimal story being told with no use of the imagination. The oblivious plugs of better known children story characters did nothing to help along this story. Children may like it, but that is a big if-if they are not already readers to begin with. Sadly, this is not one of those hidden gems that could hook your child into reading.
at 2:04 PM No comments: