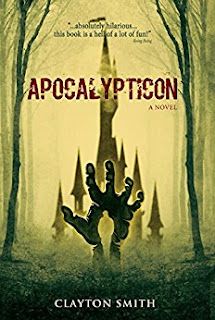 Patrick and Ben have survived the apocalypse. The world is reduced to burnt out buildings and a yellow haze that cover the earth. All perpetuated by the Jamaicans. This dark comedy chronicles two unlikely heroes as they venture out onto the post-apocalyptic American landscape. Their journey is none other to one of the most magical places on Earth-Disney World. From Yellow stained zombies to a monastery full of genderfluid monks, Patrick and Ben have an uncanny ability to land themselves in some outlandish scenarios.

Apocalypticon is Harold and Kumar meet the end of days. The cheeky humor of both characters play out well in some of the story, but overall it drags. The characters are forgettable. The book is forgettable. Parts of the story seem to catch, but for the most part, it repeats the same boring humor over and over. There were parts of the story where you were genuinely interested in what was going to happen next, but the humor kills it the moment you get interested.
at 5:23 PM No comments: 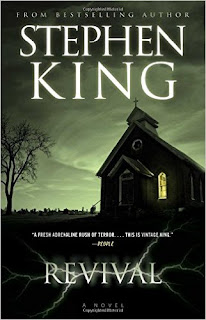 Cliche as it sounds when reviewing any novels by Stephen King, the two words most commonly used, “Classic King” should, at this point be inducted into the lexicon of language. Classic King best describes the theme of most of King’s work, and Revival is no exception.


This is a story about a young boy named Jamie Morton and the new young preacher of Harlow, Maine. What seems like a neighborly visit from the Preacher and his family, sets Jamie and Reverend Charles Jacobs down a path that unfolds over decades.


After a terrible accident that leaves the Reverend Jacobs questioning his faith in God, the Preacher leaves Harlow and Jamie thinks that is that last he will ever see of Charles Jacobs.


Jamie’s interest in the guitar leads him down a path of drug addiction that spans three decades, and his off chance meetings with the Preacher seem more than just coincidences. Fate seems to have a hand in their shared destiny, and with that, a Revival both men do not see coming. A shared secret so deep, it could destroy them both.

Revival is exactly what you can expect from King when you pick up one of his novels. He is a master of storytelling. He can weave the most chilling and compelling story from almost any obscurity, and still, keep you at the edge of your seat. Like almost all Stephen King novels, you are over faster than you realize and are secretly wishing you had at least one more chapter to read.
at 6:38 PM No comments: